The ILT’s Advanced Practice under the America Invents Act Conference (co-sponsored by the AIPLA) began its second day on Friday, April 12, with an hour on Professionalism and the AIA presented by Colin Cahoon (Carstens & Cahoon). Colin managed to make an ethics session not only informative but also entertaining, before handing off to the first panel of the day to discuss critical issues still facing patent law. The panel was chaired by Professor Carl Moy (William Mitchell College of Law) with Vince Garlock (AIPLA), David McCombs (Haynes and Boone), Wayne Sobon (InventErgy) and Dean John Whealan (George Washington University Law School) and the audience enjoyed a lively and at times controversial discussion of issues facing the courts and some recent decisions of the Federal Circuit and the Supreme Court.

The conference concluded with Bernard Knight, general counsel of the USPTO, discussing the role of the PTO in shaping patent law and policy, as well as other PTO policies and initiatives like software partnership.
Co-chairs Lisa Jorgenson and Marc Hubbard achieved their aim to present a conference pitched at an advanced level, with interactive discussions on important legal and policy considerations. Initial feedback from attendees was very positive, and the ILT anticipates presenting other advanced conferences in future. 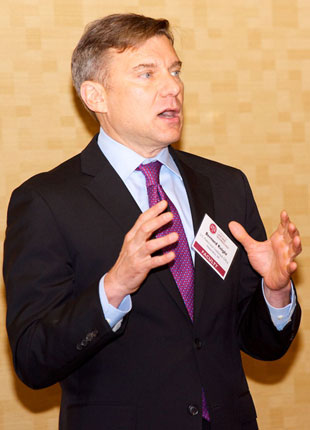