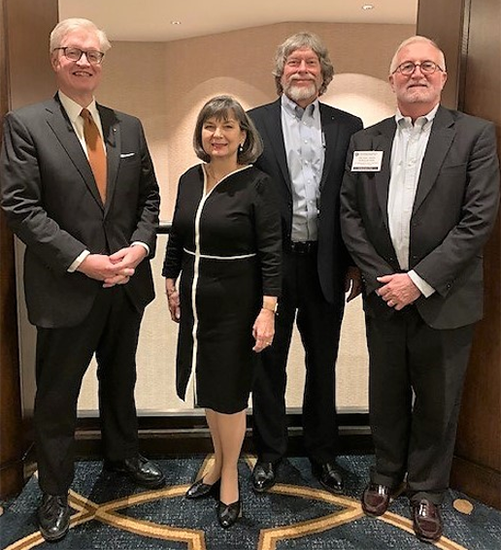 Michelle Mendez was a force of nature who was fiercely devoted to her family, her friends, her profession, and her community.

We are pleased to honor Michelle’s legacy by presenting the Michelle Mendez Serviam Awards at CAIL’s bi-annual Conference.

H. Kent Aguillard’s office has been practicing law for 40 years, primarily in bankruptcy, commercial litigation, and bankruptcy-related litigation. He holds national and state bankruptcy specialist certifications.  Mr. Aguillard is the past chairman of the Committee on Bankruptcy Specialization of the Louisiana State Bar Association and was a contributing editor for the ABI Committee on Commercial Fraud Task Force. He is a member of the LSBA House of Delegates, and past president of the St. Landry Parish Bar Association and the South Louisiana Bankruptcy Bar Association. One of the tenets he lives by is “There is no right way to do the wrong thing.”

John M. Czarnetzky is a Professor of Law at the University of Mississippi School of Law, where he has taught bankruptcy and commercial law since 1994. He has published a number of articles, and is a frequent lecturer on those areas. Professor Czarnetzky will be inducted as a Fellow of the American College of Bankruptcy Law this spring. Professor Czarnetzky has been recognized as the outstanding law professor at Ole Miss several times. In 2016, he received the Elsie Hood Award for the outstanding professor at the University of Mississippi. He is a graduate of the University of Virginia School of Law and the Massachusetts Institute of Technology.

Elizabeth G. Smith represents creditors in Bankruptcy and State Court matters. She has served on the Board of Directors for the Federal Bar Association, and since 1992 has been on the Texas Supreme Court’s District 10 Unauthorized Practice of Law Sub-Committee. Ms. Smith is past chair of the State Bar’s Moneywise Program in San Antonio, helped organize a pro bono bankruptcy clinic for the local bar association and law school, and served as Fifth Circuit Vice President/Texas for the Federal Bar Association. She is President-Elect of the Trinity University Women’s Club. A San Antonio native, she is grateful to practice in her hometown.