The Center for American and International Law ("CAIL") announced the election of Charles "Chip" Babcock IV, partner with Jackson Walker LLP, to CAIL's board of trustees during its board meeting held on June 29.

"As we celebrate CAIL's 75th anniversary and continue to build on our rich tradition of high-quality leadership, we are thrilled to welcome Chip Babcock to our board of trustees," stated CAIL president T.L. Cubbage. "Chip has supported CAIL as a Research Fellow since 2013, and his expertise in the First Amendment and other areas of law, professional dedication to the rule of law, and remarkable accomplishments make him an invaluable asset for our organization." 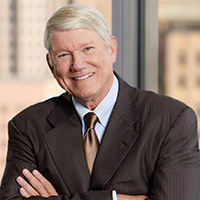 About Charles L. Babcock IV - Charles L. Babcock IV, better known to the legal community as Chip Babcock, is an esteemed courtroom advocate and a partner with Jackson Walker LLP. He works primarily from its office in Houston while maintaining an office in Dallas and serving clients nationwide. Babcock has tried over 100 cases to juries and argued over 50 appeals. He handles commercial trial work and has experience in media and First Amendment litigation. He is a fellow of the American College of Trial Lawyers, the International Academy of Trial Lawyers, the American Board of Trial Advocates, and the Litigation Counsel of America. Babcock also is a member of the American Law Institute.

About The Center for American and International Law - Founded in 1947, The Center for American and International Law is a nonprofit institution based in Plano, Texas, dedicated to improving the quality of justice by providing continuing education to lawyers and law enforcement officials in the United States and throughout the world. Since its founding, CAIL's educational institutes have established internationally recognized forums and programs addressing law enforcement administration, energy law, international and comparative law, transnational arbitration, law and technology, criminal justice, and other relevant topics. During its 75-year history, CAIL has served tens of thousands of lawyers and law enforcement officers from all 50 states and 130 countries. Visit https://www.cailaw.org to learn more.