The Theory and Practice of Private-Public Arbitration

MCLE Credit will be available 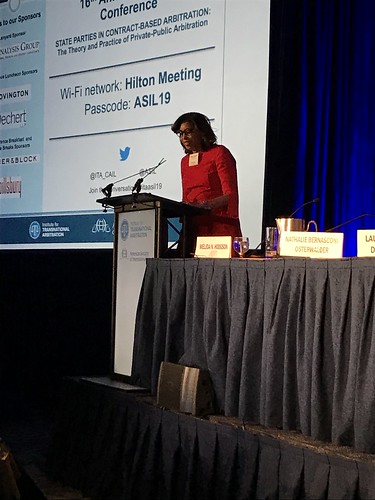 The ½-day ITA-ASIL Conference is presented annually in Washington, D.C. by the ITA Academic Council with the American Society for International Law (ASIL) immediately preceding the ASIL Annual Meeting. Scholarship is a hallmark of this conference. The conference concludes with a networking luncheon.

At the same time, contract-based private-public arbitration is often treated simply as another form of international commercial arbitration, even though the involvement of public actors raises a host of distinct issues, including problems of administrative and constitutional law, that affect arbitrability, arbitral procedure, court supervision, and enforcement. Furthermore, because of the participation of public actors, many of the legitimacy issues currently surrounding treaty-based arbitration arguably also arise in respect of contract-based private-public arbitration. The conference examines the theoretical framework for, and challenges of, public actor participation in contract-based investment and commercial arbitration and addresses the characteristics of such arbitration as compared to private-private arbitration in both theoretical and practical terms.

The keynote introduces the kinds of contractual disputes involving public actors that are settled through arbitration, discuss the drivers for such arbitrations, and provide a conceptual framework to analyze these arbitrations. It will discuss in particular to which extent contract-based private-public arbitrations should be treated in the same manner as private-private commercial arbitration, or whether they should be related closer to the debates we have in the context of investment treaty arbitrations.

The Legal Framework of Private-Public Arbitration: At the Crossroads Between Public Law, Commercial Arbitration, and International (Investment) Law

The Practicalities of Public Actor Involvement in Contract-Based International Arbitration

This rapid-fire Q&A-style panel examines the practical aspects of public actor participation in contract-based investment and commercial arbitration from the perspective of different actors. It includes assessment of the experience of, and concerns for: (1) counsel; (2) the arbitral institution; (3) the arbitrator; (4) civil society; and (5) the public actor involved.

For information and to register for the 113th ASIL Annual Meeting, March 27-30, 2019, also presented at the Washington Hilton Hotel, please click here.

The cost of housing is not included in tuition. However, rooms (in limited number) have been reserved at the Washington Hilton Hotel, 1919 Connecticut Ave NW, Washington, DC 20009. You may book, modify, or cancel hotel reservations online. The reduced conference room rate is $259 + applicable taxes/night. We anticipate the room block will sell out, so we encourage you to make your reservation early.  The last day to obtain this special rate is March 6, 2019.

Conference Breakfast and Coffee Breaks - $2,000 each

The Center for American and International Law does not discriminate on the basis of race, color, sex, religion, national origin, age, disability, veteran status or any other protected status in educational activities, scholarship programs or admissions.

We do not sell or rent information to any outside parties. By providing your information, you will receive postal and electronic communications from the Institute for Transnational Arbitration (ITA) of The Center for American and International Law (CAIL) in accordance with CAIL's Privacy Policy. If we co-sponsor a program with another organization, information may be shared between the parties. All such co-sponsors will be identified on the event details and registration page. At any point, you can opt-out or unsubscribe by selecting either link at the bottom of each email or call us at 972.244.3400.