A Walk in the Woods

The 16th Institute for Natural Resources Law Teachers began in Flagstaff, Arizona on May 29, 2013. The Institute is co-sponsored by the IEL, ABA-SEER and the Rocky Mountain Mineral Law Foundation. Wednesday’s events were two field trips for delegates, the first exploring the ponderosa pine forest around Flagstaff which has been radically altered by 150 years of logging, grazing and fire suppression. Some two million acres of forest are now included in the Four Forests Restoration Initiative (4FRI), a landscape-scale restoration aiming to provide fuels reduction, forest health, and wildlife and plant diversity. The scheme is not without its critics, and delegates were exposed to both sides of the debate around 4FRI while exploring different areas of the forest. 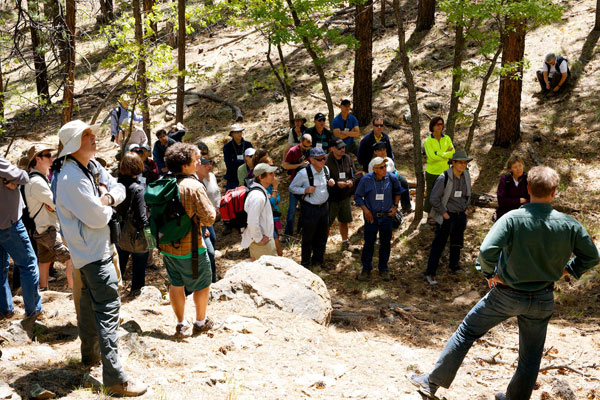 Later in the day, institute attendees had the chance to visit and to debate another controversial local project, the use of treated sewage water to make snow at Arizona Snowbowl, a popular ski resort in the mountains above Flagstaff. The mountains are the San Francisco Peaks, and are held sacred by a number of Indian tribes. The tribes believe that the resort areas, the snowmaking, and particularly the use of treated wastewater are a desecration of the sacred mountain, and have been actively protesting as well as unsuccessfully suing the Forest Service (which issues permits for the activity) under NEPA and the Native American Religious Freedom Restoration Act. Passionate views were expressed on both sides, with delegates hearing from representatives of the tribes, the lawyer who argued their case before the 9th Circuit, and representatives of the ski resort, as well as enjoying the breathtaking scenery around the Arizona Snowbowl facility.

The institute continues on Thursday and Friday, May 30 and 31, with classroom based presentations and discussions on environmental and natural resource topics and teaching methods.